So there’s a new “game” going around the internet mainly in the form of pictures. It’s called Alcohockey and it was supposedly invented in Canada. While the rules don’t seem to exist online (no internet in Canada?) it appears that one plays air hockey until the puck lands into one of the cups. 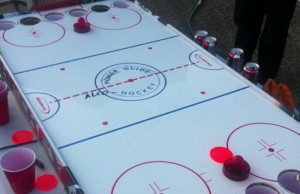 One major downside to this, it destroy the functionality of the table. Your average air hockey table uses one large fan to create air pressure inside the table. The pressure slowly escapes through the holes in the top causing the puck to “float.” The balance between the size of the fan and the size of the holes is very important. Drilling 12 gaping holes into the top of the table means you’ve got a fancy way to blow air into your face.

This makes Alcohockey essentially less fun shuffle board. To compound the problems, what happens when you actually score. I assume you remove the cup and drink it. Now there is a gaping hole in the table (see physics above) and the puck will simply fall to the ground. You might suggest, like a good drinking game player, that the cup can be refilled and replaced allowing the drinking to continue. But when will the game end? Continue drinking and refilling until one competitor can’t stand? Certainly fun for the participants but all those cold, bored, Canadian spectators have nothing to do but watch.

More likely, the game would end when a certain score is reached. This brings me to the most damming of arguments. Airhockey has been used for years to facilitate drinking. I don’t know if it’s ever had a name beyond “drinking airhockey” but it certainly has earned it’s place in history. The rules are simple, play air hockey and drink whenever your opponent scores on you. If you’re into the drinking part of the drinking game (you should be) then drink your opponents current score. First goal, 1 sip. Second goal, 2 sips. Eighth goal, 8 sips. You get the point. Also, your family and friends will be less annoyed when the hangover wears off since you left their expensive gaming table intact.

This site uses Akismet to reduce spam. Learn how your comment data is processed.